a new prisoner publication is beginning. it is unstoppable. 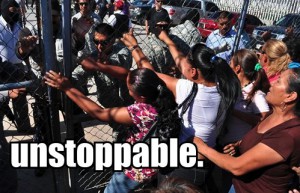 Unstoppable is specifically by and for incarcerated folks who identify as women, gendervariant, and/or trans. This anti-authoritarian publication seeks to blend radical political analyses with personal experiences and observations. We want to elevate the voices on the inside that are often excluded from political dialogues, while also asking people on the outside to convey their social and political realities to people on the inside. Unstoppable aims to build bridges across prison walls and beyond them by facilitating dialogue and engagement between those who are incarcerated and those who are not.

Unstoppable is asking for contributions in the form of artwork, poetry, writings, social commentaries, fieldnotes from the prison yard or the streets, critical views of power structures and more. Unstoppable is particularly interested in focusing on gendered issues and systems of social control in the U.S. context, but we invite a wide array of topics. Such topics might include: organizing against police terror; personal triumphs in overcoming past or ongoing trauma; community-based responses to gendered violence and abuse; self-care in high stress environments; the consequences of deprivation in the U.S. prison system; environmental liberation; forms of resistance in women’s prisons; do-it-yourself ethics; astrology and planetary transits; et cetera!

Please email unstoppablepublication@gmail.com if you wish to be involved with this project in any way or if you have a contribution to share.

Or you can write us at unstoppable, po box 11032, pueblo, co 81001 to contribute or to get a free subscription if you are currently incarcerated! Please spread the word to folks on the inside and out; we want this distributed broadly!